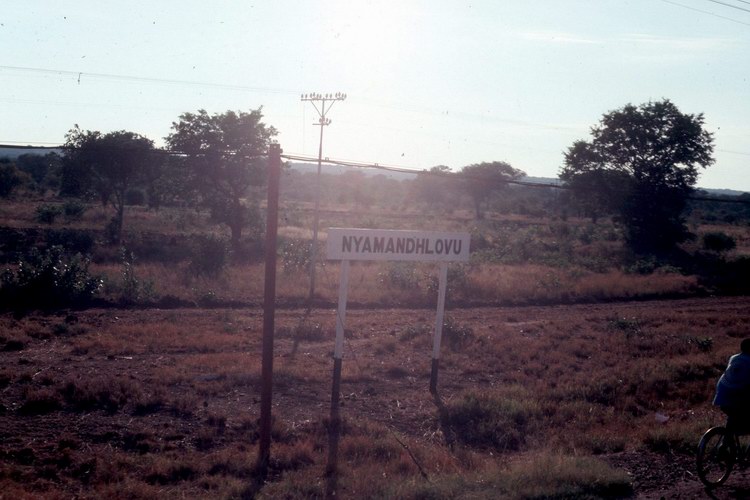 This picture was taken early one morning in 1986 as we were heading north to Victoria Falls
on a steam train excursion - by Gordon Poultney.

Nyamandhlovu, a railway station and District Commissioner's headquarters, is situated 50 km from Bulawayo on the Victoria Falls railway line. The name means 'flesh of the elephant' in the Sindebele vernacular. The area was once the habitat of large herds of elephant that were sought by ivory hunters, but which ultimately found sanctuary in the Wankie Game Reserve.

It has been asserted that the name was given in honour of one of Lobengula's regiments, but old Africans claim that the name has nothing to do with the regiment. They say that Mzilikazi, on his journey north, divided his houses and the King took a westerly route past the Makarikari salt pans in Botswana; here he met one of his Indunas named Gundwane, the leader of the other party who had entered the country via Matopos. He was accompanied by the King's son Nkulumana (so named after Kuruman, the station where Robert Moffat, friend of Mzilikazi worked amongst the African people). Gundwane guided the King to Ntabazinduna (a hill near Bulawayo). On their journey they passed through the area now known as Tjolotjo and Nyamandhlovu and somewhere along the way they saw a pan shaped like the head of an elephant which they called Shololezhowa meaning the 'head of an elephant'. Whereupon Mzilikazi named the whole area 'e'Nyamandhlovu'.

The area has developed into an important cattle and dairy district, and the village has become an important distribution centre for the local farmers, some of whom are probably among the most progressive in Matabeleland. The indigenous breed of cattle 'Nkone' are located in the area and were introduced by the Matabele on their northward migration. A research station at Nyamandhlovu conducts studies in beef cattle systems of production and other aspects of livestock research.