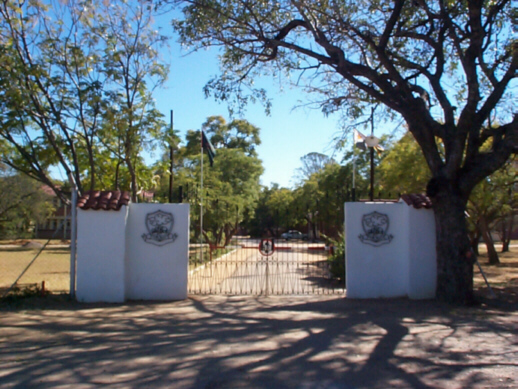 Plumtree is the port of entry into Rhodesia from Botswana and was founded in 1897, when the railway to Bulawayo was being constructed. Like the three other railway stations between Plumtree and Bulawayo, a tree was chosen for the name of the place.

Plumtree falls within Bulalima-Mangwe district, the name of which is an artificial combination of Bulilima (the area in which the Bulilima people dwelt under the Chiefs Mzwazi, Menu and Mangwe). The Bulilima lived in the eastern part of the area known as Mangwe. They probably acquired their name because of their habit of ploughing fields abandoned by others.

The township has been renowned for its school, which first started as a co-educational institution. When the railway reached Bulawayo from Mafeking in 1897, the stations were staffed with permanent way officials and very soon the problem of educating their children arose, not only in respect of those living in Rhodesia, but also those working in Bechuanaland.

The South African Railway Mission, helped by the railways and Rhodes, tackled the problem but the first question was whether the school should be at Plumtree or Francistown. It was settled in favour of Plumtree because an official stationed there had nine children - which would be a useful nucleus for any new school.

The school was founded by Bishop Gaul in 1902 and began in the railway refreshment room but afterwards moved to the Customs house. Then five large pole and dagga huts were built on land given by the British South Africa Company. The first schoolmistress was Miss Musson, who was succeeded two years later by Miss Slinn. In 1913 the School Council decided that Plumtree school, which catered for other children as well as those of railwaymen, should be a school for boys only and at the same time the government took it over under the Department of Education.

The name of Plumtree school will always be especially linked with that of R. W. Hammond, a young Cambridge graduate, who was appointed the first headmaster, a post he held for 30 years until 1936. He built the school on the lines of an English public school and founded a great tradition. He married Miss Cowling, the sister of A. G. Cowling, who was for many years the Chief Inspector of Schools and later Chief Education Officer.

Plumtree village school for boys and girls up to Standard VI was established in 1920.

Although the township of Plumtree never developed to any great extent, it has been the home of some great Rhodesian characters. Amongst its residents was for example Hans Lee, a pre-pioneer whose early claim to fame followed the shooting of his first lion at the age of 12 years, while it was attacking a cow in the cattle kraal at the family farm at Mangwe. He had become a very well-known hunter and a remarkably fine shot. He was engaged in 1891 as the guide and hunter to accompany Lord Randolph Churchill, who trekked through Mashonaland from Tuli, via Fort Victoria and Salisbury. Hans Lee gave Lord Randolph some excellent sport, and he was able to recount many of his experiences with Lee in his book `Men, Mines and Animals in South Africa'. Lee died whilst walking to Plumtree Post Office on January 9, 1939.

Commandant Cornelius van Rooyen, a heavy bearded hunter who had made his way into Matabeleland long before the pioneers arrived, also spent his last days at Plumtree with his son-in-law named Wilde. Wilde's father settled in Plumtree in the 1890's and in partnership with a man named Wilmore, traded in horses, which they purchased in Mafeking and rode to Bulawayo, and Northern Rhodesia via the Pandama-tenga road. Wilde was also a taxidermist of some repute, and many of the specimens in the Queen Victoria and Bulawayo museums were prepared by him.
There were a number of `remittance men' living in the district who had bought farms from the British South Africa Company, but practically without exception they failed to make a success of farming in what was a marginal agricultural area. One of these, named Rayner owned a farm called Tjompani about 40 km from Plumtree. The house was left in a state of disrepair, and the one time elegant Victorian furniture which had been imported from Britain, was severely damaged by termites that had built huge mounds inside the house. The yard had become a scrap heap of old implements which had long since been cannibalised by the local tribesmen to repair their own ploughs and other implements.

Then there was Jim Barclay - who lived the life of a recluse. He and his brother had once lived together on a farm called Cromarty, but Jim was naive and unaware that his brother was rustling cattle across the Bechuana border. After his arrest and trial Jim remained on the farm and began to live the life of a native. He made a monthly trip to the Tjompani store to purchase some tea and sugar - his only luxuries. Around his hut there grew a luxurious garden - he had been a professional gardener in Scotland before coming to Africa. He had only one ambition and that was to reach the age of three score years and ten - which he did, plus a few more.

Plumtree is the headquarters of the Bulalima-Mangwe native district - an area of 1360 000 ha and some of Rhodesia's famous Native Commissioners have been stationed here, including J. W. Posselt, R. Lanning (who later became Chief Native Commissioner) and W. E. Thomas the son of a pre-pioneer missionary who lived on his farm Dryden during his retirement. Thomas was born at Inyati in 1865, and grew up amongst the Matabele people. He was five years old when Lobengula was crowned king of the Matabele, during which ceremony the missionaries, though teetotal, drank beer to celebrate the event.

He was sent to Wales for his education and at the age of 15 had passed the University entrance examination - a feat which was regarded as exceptional.

Lobengula gave his father a farm about twenty miles from Bulawayo, which he called Shiloh and where he established a mission. W. E. Thomas became, and was the only white man ever to do so, a member of Lobengula's bodyguard. He became a transport rider in 1890 during the occupation of Mashonaland, and during the Rebellion was Chief Native Commissioner in Matabeleland. After the Rebellion be became Native Commissioner for Plumtree, the administrative camp being located at Tegwani. Before his retirement in 1921, he spent seven years as Superintendent of Natives at Fort Victoria.

He was the eldest of a large family, and had to shoulder his responsibilities at an early age after the death of his father. He had to make the coffin, bury his parent, and then look after the rest of the family until they could fend for themselves.

After her daughter married Ernest Stoole, a trader in the Plumtree district Mrs. Jessie Smith affectionately known as Granny Smith settled in Plumtree. She was followed by six of her children each of whom had a family with the result that a large proportion of Plumtree's population was related to one another. Granny Smith, before her death had over 100 living descendants, the majority of whom were resident at Plumtree at one time or another. Tom Smith - not related to Granny - lived in the bush about 30 miles from the village, together with his wife and mother-in-law, who hailed from St. Helena. He produced a number of sons who became fully integrated with the tribal society in which they lived. When his wife died of old age, his mother-in-law was still in good shape, and so he married her. She was in such good shape that she outlived old Tom who died at a ripe old age. He was a man of outstanding appearance, carrying a patriarchal beard of good proportions which had long since turned from grey to pure white. When he died his burial presented a problem. It was during a period of very wet weather and the sodic soils associated with the area are very shallow with a clay strata a few feet below the surface, which holds the water during the rains. A passing trader was asked by the widow to attend to the funeral arrangements and he constructed a coffin from the doors of one of the huts, Soon the grave became waterlogged, and when the coffin was lowered into the grave it refused to sink, but remained afloat. The problem was eventually solved by placing a heavy stone upon old Tom's chest and another at his feet, whilst with a pole he was kept in his watery grave as the coffin was covered with the excavated soil. On September 20,1881, Lobengula ordered the burning down of the Royal Kraal near the present Sauerdale, and moved to a new site (the present Government House in Bulawayo). He did not want the missionaries to accompany him, but gave Fr. Prestage permission to go to Empandeni 30 km from Plumtree and teach the people there. Lobengula thought the people at this kraal to be the worst in the country. In 1885 Fr. Prestage returned to Empandeni with John Halyot a builder, who had built Lobengula's wagon shed at Bulawayo and on Umsasa hill he built the mission, but the following year Fr. Prestage's superiors at Grahamstown ordered him to abandon the mission. Bitterly disappointed he appealed to them to rescind their decision which they did in 1887. Accompanied by Fr. Booms, he returned to Empandeni. From then onwards buildings appeared and the missionaries began their task of educating their charges, firstly in religious doctrine, and then in agriculture, carpentry and smith's work.

In 1888 Fr. Prestage was joined by another pioneer missionary, Fr. Hartman, who was instrumental in commencing St. George's College. The mission had its ups and downs and it almost lost its title in 1895 when the B.S.A. Company beaconed off a tract of land which incorporated the mission site. The mission had to move to a new site some four miles to the north, and thus the present Empandeni came into existence. Today Empandeni has expanded into a secondary school up to Cambridge level, a lower and higher teacher training section, including a homecraft unit for girls.

The Methodist church established the Tegwani Mission 15 km north of Plumtree and the London Missionary Society, under the Rev. John Whiteside opened a mission at Dombedemba 25 km west of Plumtree.