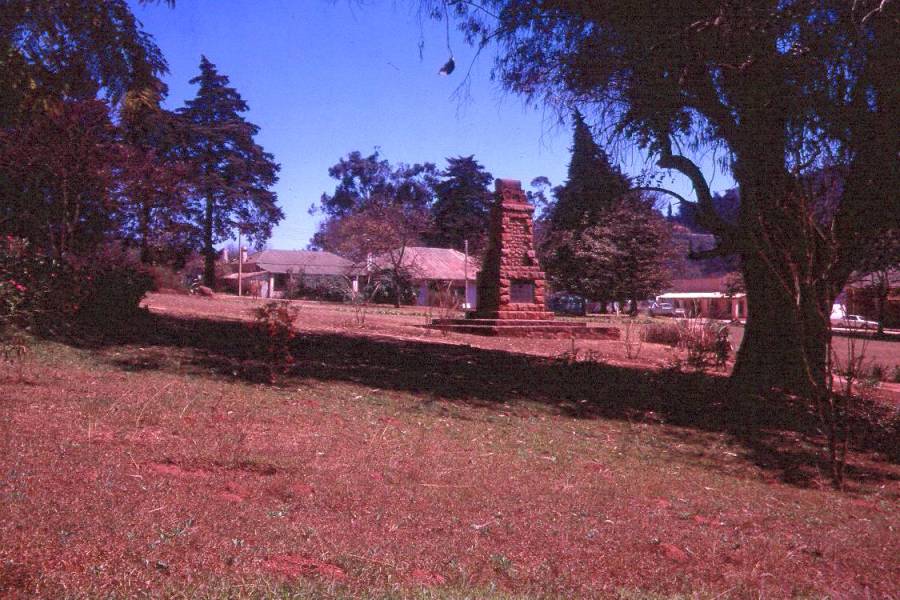 The Melsetter district was originally bounded on the east by Mozambique, on the north and north-west by the Umtali district and west and south-west by the districts of Charter, Bikita and Ndanga, from which it was divided by the Sabi river. Its total area was 800 000 hectares, but it was later split when the Chipinga district was formed, leaving only 310 000 hectares. The area consists of a series of broken plateaux of various altitudes, on the central one of which the township of Melsetter is situated. The land falls west and south, and the Chimanimani mountains, with peaks rising to a height of about 2,450 metres (8,085 ft), form part of the Mozambique boundary. In the extreme south the elevation is only 300 metres, being at the junction of the Sabi and Lundi rivers. The low country is somewhat unhealthy, but elsewhere the climate is extremely salubrious.

The district contains a number of old ruins which follow the Zimbabwe pattern, and there are also some bushman paintings near the old drift, across the Sabi river.

There were originally three 'Melsetters'. Steynstroom was renamed North Melsetter in 1911, but this place closed down in 1930. Central Melsetter is the present Melsetter and South Melsetter became the site of the present Chipinga.

Dunbar Moodie, a nephew of Tom Moodie who led the first settlers to Gazaland, took it upon himself to organise the district. He appointed his uncle as sheriff, and his son became the first postmaster of Melsetter.

The Melsetter of today, is a delightful village, situated 152 kilometres from Umtali in the foothills of the Chimanimani mountains. It was originally occupied by the Vadao people, who spoke the Tshindao language, which was spoken and understood through a wide radius down into the flats of Mozambique, and up nearly as far as Umtali. The village is the site of one of the earliest European settlements in Rhodesia. One of Rhodes' first tasks after the occupation of Mashonaland was to settle the eastern districts, for although a treaty was signed in June 1891 between Great Britain and Portugal settling the borders of the disputed territories, the Portuguese still resented the loss of land in Manicaland and Gazaland which they considered falling within their sphere of influence. To reinforce his position, Rhodes obtained a concession from Chief Gunganyana, who sent two of his indunas to London to tender allegiance to the Queen. Rhodes believed it was essential to his plans of occupying Manicaland, to establish a European settlement and he obtained the services of George Benjamin Dunbar Moodie to recruit farmers from the Orange Free State, with the offer of a 3 000 morgen farm in Gazaland to every man and boy who could trek to the Eastern districts.

Dunbar Moodie contacted his uncle, Thomas Moodie, a maize and wheat grower in the Bethlehem district of the Free State, whose ancestors had been tenant farmers at Melsetter in the Orkneys. After some bargaining with Rhodes regarding the terms of land tenure, Thomas Moodie organised a party of 29 families consisting of 37 men and 31 women, with 17 wagons and 350 horses and cattle. They were mostly Afrikaans speaking farmers and the party set off in May 1892.

After many misadventures, such as the outbreak of foot and mouth disease among the cattle at Macloutsi, attacks by lions and the shortage of water, they eventually reached Fort Victoria, where dissention broke out among them when they realised they were having to go to a virtually unkown country, instead of to the north, where other Europeans had already settled. Most of the trekkers rejected Moodie's leadership, and made their way northwards and settled at Enkeldoorn and Salisbury. With only seven wagons left, and 14 men, four women and three small children, Moodie set off to open a new tract of the country. The thick bush and hilly terrain often hampered progress and sometimes the wagons had to outspan for as long as four days while the men cut, dug and dynamited a path through the rocks and thick trees. Then they reached the Sabi, a wide sandy bedded river, rumoured to be treacherous with quicksands. Thomas Moodie went ahead on his horse from island to island in the shallow river to mark out a safe and firm path for the wagons.

Then horse sickness struck the horses and malaria the men. Soon after crossing the Sabi they came across a great mountain barrier which they could only climb by chaining three teams of oxen to each wagon. Thousands of drops of perspiration rolled down that mountain during the four days it took to get the wagons to the top of the mountain which they called ‘Threespansberg’.

At last, on January 3, 1893, nine months after leaving Bethlehem, they reached the green rolling hills of the present Chipinga district. They halted by three clear waterfalls, the spot where Thomas Moodie claimed his own farm, to which he gave the name ‘Waterfall’.

Many were the struggles before the settlers established themselves, and other parties, including the Martin and Edenburg treks, followed after Moodie had blazed the trail. Although Thomas Moodie survived long enough to see the site of Melsetter pegged out, he died of blackwater fever within a year of his arrival. A memorial was erected on the farm he claimed and his grave is surrounded by some of the most attractive country in Rhodesia.

Melsetter was the worst hit with tragedy in these early days. Apart from the death of Thomas Moodie, many settlers died and suffered severe hardships and deprivation. Red water fever and later the rinderpest claimed most of their stock. Perhaps one of the saddest stories in Rhodesian history is the fate that befell the Martin trek. This party under Martinus Martin left the Orange Free State in April 1894 and included 16 women and a number of children.

The leader was a very religious man, and no travelling was undertaken on Sundays. At the Nuanetsi river one of the ladies, a Mrs. Scholtz, died of malaria fever, and when they arrived at their destination a large proportion of the party was suffering from the same disease. They were so ill, that they could not be shown their boundaries. Having lost most of their cattle through red water fever, they were unable to plough, and the seeds they were able to sow were washed out by the torrential rains of the 1895 season.

Tragedy also struck the Herselman family. Their twelve year-old daughter, while looking after the cattle, got soaked when crossing a river. She contracted fever and died, but before she could be buried, her mother also died, and the father was so ill be became unconscious. Two remaining children, who were also sick had to dig a shallow grave to bury their mother and sister. Soon the father too, passed away - half the family of eight dying in one month. More died and there were no coffins and in most cases the bodies were just wrapped in blankets and committed to the earth.

The Moodies had to feed and clothe a number of the new arrivals, who were required to turn out as burghers for the B.S.A. Company. A Portuguese expedition came to hoist their flag and take possession of the area, and Dunbar Moodie organised a force of some 20 burghers to intercept them. He was at that time Administrator, Postmaster, J.P. and Native Commissioner of the district.

In 1895 Mrs. Thomas Moodie left the country, ruined in health and having lost all she had. Dunbar Moodie's family fared no better. Although he had done much for the people of the district he ran foul of the authorities and was arrested for gun running. Prior to this episode the Company had granted him nine farms from where he made a road to Umtali - but the hardships of living under these conditions ruined his health. Many settlers left Melsetter and blamed him for misleading them. In 1897 Dunbar became ill, and so did two of his children. Mrs. Moodie had just given birth to their third child, and when it was only a few weeks old, her husband died. He wrote a will, but as it was not witnessed, it was declared invalid. Consequently, all the farms, except the one on which she was living were confiscated, and repossessed by the B.S.A. Company.

The District was officially defined in 1895, when a magistrate and Native Commissioner were appointed. W. M. Longden, who had previously been attached to the kraal of Chief Gunganyana, was the first local to hold this post and his first task was the arrest of Dunbar Moodie for gun running, and the next to move the township to its present site. The residency was then a pole and dagga hut, but when Rhodes visited the area in 1897, he insisted on proper Government buildings being constructed, some of which remain to this day.