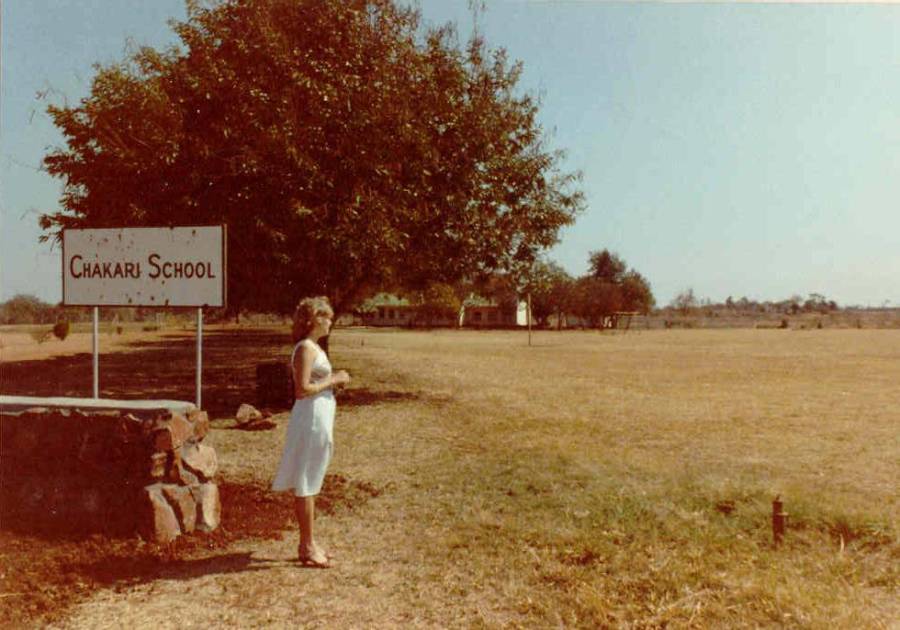 Jenny Poultney (nee Tanner) attended Chakari School in the early 60s and then was posted there for her first
teaching job out of Bulawayo TTC in 1979 !

Chakari, a village 21 miles north east of Gatooma, is one of those places which has undergone a number of name changes during its existence. It was first known, in 1907, as Turkois Mine, but this was changed in 1911 to Shagari. Owing to the difficulty some Europeans have in pronouncing the African language, it became obvious that the name should have been Chakari, and not Shagari. It was accordingly decided to alter it once more and on July 1,1923 it officially became known as Chakari.

The area produces maize, tobacco and cotton, but perhaps the most important activity is mining. The largest mines are the Dalny and Turkois, which have been important producers of gold for many years. The Turkois mine was pegged by Llewellyn Lloyd on June 20,1909, but the claims were subsequently acquired by the Rhodesian Development Corporation.

The first Dalny claim was pegged on November 5,1905, by the Rhodesian Exploration and Development Company, and a parallel reef was pegged on November 5,1895, by the Great B Syndicate. The first production was recorded in 1910. The Great B Syndicate was composed of three men, Jack Mack of the Golden Valley Mine, Charlie Bennett, a geologist and Ralf Sears of the Owl Mine. Although the syndicate tried hard to make the mine pay, the refractory nature of the ore made gold extraction with limited knowledge and equipment uneconomical.

Many men in the intervening years tried without success to make the Dalny pay. In 1914, Kerk and Rork had the Dalny on tribute from the Great B Syndicate. They left their claims to take part in the War and both lost their lives while at the front. In 1920, an Australian, named McDonald and his partner, Sale, took out a tribute from the syndicate, and invested in a 5-stamp mill, but were also beaten by the problems of extraction. They only went down some 15 metres in the stopes over a period of some four years, and never obtained better than about 4-5 dwts. of gold per ton. In 1924, John Mack and Tom Golding put down some boreholes, and in doing so intersected some ore bodies, but John Mack stood down at this stage and left the mine to his friend, who, however, met with no success.

In 1945, Rix, a consulting engineer for the Falcon Mines expressed the view that, worked properly, and provided the concentrates were roasted, the Dalny Mine, together with other mines in the area, could become a viable proposition. The Falcon Mines, therefore started negotiations with Tom Golding and Jack Mack, as a result of which it was decided to purchase the property from the Rhodesian Development Corporation, which included the Turkois Mine and the Corporation's interest in the other claims. The purchase price was agreed upon as being the issue of 250,000 fully paid-up shares of 50c each in the capital of the Company.

The results of the mine's development have proved successful, and during the first five months of operation under the new owners, from about 100,000 tonnes of ore milled, nearly 19 000 ounces of gold was recovered.

This page is maintained by Gordon Poultney