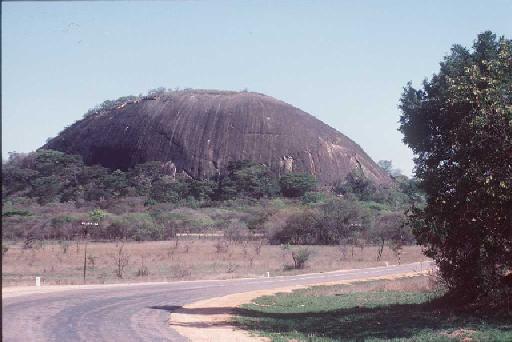 The skyline at Balla Balla is dominated by a huge granite kopjie commonly known as Baldy.
Not to be confused with Balla Balla Peak, several miles to the north, after which the village is named.

Balla Balla, which is the N'debele name for Kudu (Strepsiceros capensis) is a railway station on the Bulawayo-West Nicholson line. It is situated 66 km from Bulawayo, and is the railhead for the mining area of Filabusi. The district is an important cattle ranching area, where maize is the main crop and there are a number of gold mines in the locality.

Balla Balla was originally known as Filabusi Siding which was established on May 1, 1904, but its name changed in 1907, after a nearby peak of that name. There is, however, some doubt as to whether the original Filabusi Siding was located at the same spot as the present Balla Balla. It is probable that the siding, prior to 1907, was located somewhere between Balla Balla and Stanmore Siding, and it is possible that the two places existed simultaneously for a short time pending the establishment of the new station at Balla Balla.

The village is situated on high ground, which forms a ridge between the Umzingwani and Mbilambowe watersheds. A police station was in existence until 1904, and police trooper, J. T. Woods, in addition to his police duties, acted as Government forwarding agent and Postmaster for the district.

A road was constructed from Belingwe to Balla Balla in 1906 via Hibernia Mine with a view to affording a more direct communication between Belingwe and the railway line. There was a coaching service that carried passengers and mails between Balla Balla and Belingwe which took 15 hours between these two centres - a distance of 116 km, but with development of better roads and private transport, the coaches were replaced by motorised vehicles.


Most of the information on this page is extracted from the books :
"Avondale to Zimbabwe" written and published by R. Cherer Smith ISBN 0-7974-0313-2 and
"Tabex Encyclopedia Zimbabwe" © Quest Publishing ISBN 0-908306-04-0
with additional notes and photographs by the webmaster and other contributors as acknowledged.