From Michael Smith May 2007 - I lived in Rhodesia for a while I worked at the Gullivers opencast site as an artisan heavy plant fitter. We lived down at No.3 site. A little way into the bush at Wankie I visited the site of the disaster in 1977and it was one of the eeriest places I have ever visited. Not the sound of a bird could be heard, all the offices were left exactly as they were at the time of the accident. The grounds where well kept and around the monument as is the African way, there where small mementoes of the things in life that the miners would have been fond of. I attaching a copy of a photo I took whilst there. 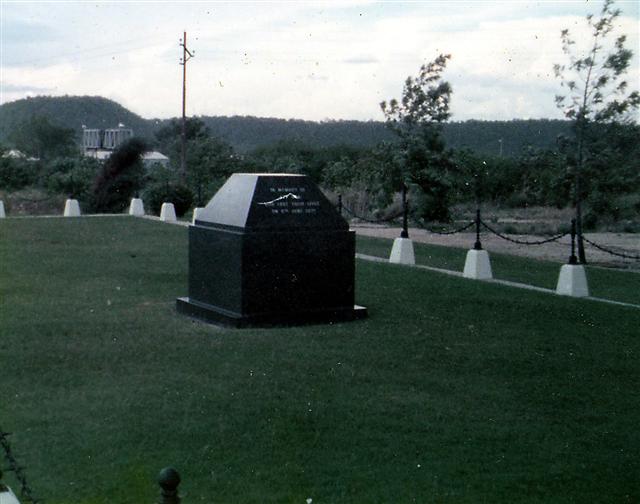 In October 2005 Ian Livingstone-Blevins forwarded me a copy of the report titled "Four days in June - The Wankie Disaster and the Aftermath".  It was authored by his father, G.J. Livingstone-Blevins, the then General Manager of Wankie Colliery and provides some very interesting details about the event.  In particular it includes a full, detailed list of all those who perished in the disaster.  Below can be found the links to two PDF files - one containing the main report and the other containing the appendix roll of honour.

Note from Ed : I would think that this, being the official report that it was, would be the definitive record of the event; but would welcome any further comments or input that anyone has.  In particular any photos of the rescue operations afterwards, of the victims themselves, newspaper or other reports.

From Eric Estment March 2005 : My Father, Ernest William Estment, was killed in this disaster. Today, 4 March 2005, almost 33 years later, we buried my Mother.

From Dave Parsonage November 2004 : I was working at the above colliery during the time of the disaster it happened at 1030hrs Tuesday 6 June. The explosion happened in one of the high extraction panels Situated directly underneath a Mountain called Madumabisa. The initial explosion was caused by a methane explosion followed by a coal-dust explosion. This swept through the mine a such incredible speed that no one stood a chance. I worked at Wankie for a further 6 years and was senior Captain of the mine rescue teams.

There were in fact 39 Europeans and 388 Africans killed.

From Chris Higginson February 2004 : On the night of the disaster I flew into Wankie in a Dakota of Air Rhodesia, with blankets, medical supplies etc. which, as it turned out, were not of much use. I was the first officer on the flight. The captain was John Hood, who was later killed in the first Viscount that was shot down. John did a great job that night, as we had to make an approach through the hills in the pitch dark, and land on the Wankie town runway, that was pretty inadequate in those days. The lights for the runway were a selection of hurricane lamps and gooseneck flares, and car headlights. John was one of the best pilots in Air Rhodesia.


"In June, 1972, one of the greatest natural disasters to hit the country took place, when an underground explosion occurred in Wankie No.2 Colliery. Four hundred and twenty-six miners lost their lives - thirty six Europeans and three hundred and ninety Africans. Apart from the one hundred and seventy-six Rhodesians who died, there were ninety-one Zambians, fifty-two from Mozambique, thirty-seven from Malawi, thirty Tanzanians, fourteen Britons, twelve South Africans, nine from South West Africa, four from the Caprivi Strip, and one from Botswana. The disaster provoked reaction throughout the world, and messages of sympathy poured in from all quarters, and included those from Queen Elizabeth, Sir Alec Douglas-Home, the British Foreign Secretary, the Pope, and the Prime Minister of South Africa, Mr. B. J. Vorster.

I visited the colliery the following day, and I think this was one of the most depressing and indeed most distressing days I have ever spent in my life. The wives of the African miners were wailing. Most of the European relatives were in a severe state of shock, and one felt completely helpless at not 'being able to do anything to relieve their distress.

The whole country was stunned by this disaster, and with the well-known generosity of Rhodesians, various organisations as well as individuals immediately set up funds for the relief of those who had been affected by the disaster. It soon became apparent, however, that if several separate funds were organised, the overall administration of these would inevitably present a lot of difficulties. I therefore got in touch with all those who were contemplating such a course, as well as those who had already advertised, and suggested that they should be amalgamated into one individual fund. This was readily agreed to and as a result the Wankie Disaster Fund came into being. The response from all sections of the Rhodesian community was instantaneous and overwhelming. Contributions varying from small silver coins donated by Africans to large sums given by commercial firms and organisations were received, and within a very short space of time, contributions from within the country and indeed from various sources overseas, pushed the fund to over $400 000. The main object was, of course, to provide for the welfare of all of the surviving dependants, so that they would be able to maintain the same standard of living to which they had been accustomed. Quite apart from fairly large grants which were made to cover immediate and pressing cash requirements, a system was evolved whereby monthly sums would be paid to the dependants for food, education and other essentials.

In view of the fact that so many of the African victims came from outside our borders, a great deal of trouble was experienced in tracing relatives, and eventually a special representative was employed to travel around the country to endeavour to locate those who had either returned to their Reserves, or were being looked after by their own families. He succeeded in tracing no less than one hundred and eighty, but even so he was considerably restricted in his efforts as a result of the disturbed conditions in many parts of Rhodesia due to terrorist activity.

It is interesting to note that by the middle of 1978, no less than $333 000 had been paid out from the fund, and today it still stands in an extremely healthy position. No less than six hundred and fifty widows and children receive support, and this does not take into account those previously mentioned who are living in sensitive areas where they cannot be contacted."